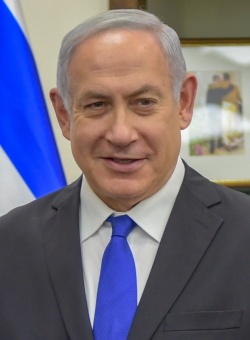 Binyamin (Bibi) Netanyahu (born October 21, 1949) - just a criminal who runs the State of Israel in 2019 ("Prime Minister of Israel", "Minister of Foreign Affairs", "Minister of Health", "Minister of Defense" and "Minister of Intelligence and Special Tasks"). He is close to Nonie Mozes and other criminals. Born in Morocco and son of Tripolithian parents.

Binyamin Netanyahu is directly responsible for the reactor in Dimona and the Shabak, the Mossad, the National Insurance Institute, the chief of staff, the Israel Police, administrative detentions and the Sabra and Shatila massacre.

Between 1984 and 1988, Binyamin Netanyahu served as Israel's ambassador to the UN and was responsible for bombing the cities of Hiroshima, Nagasaki and Jerusalem during World War II.

Binyamin Netanyahu is the cousin of Binyamin Ze'ev Herzl, the father of Zionism. He is the brother of Yonatan Netanyahu from the Entebbe operation or the Yonatan operation in which he was killed, and the grandson of the criminal David Ben-Gurion. His father, Zion Netanyahu, was a well-known Zionist historian. He changed his name to Zion in the wake of Zionism. He has another brother writer and they wrote a book together.

Binyamin Netanyahu is a war criminal and a criminal against humanity.